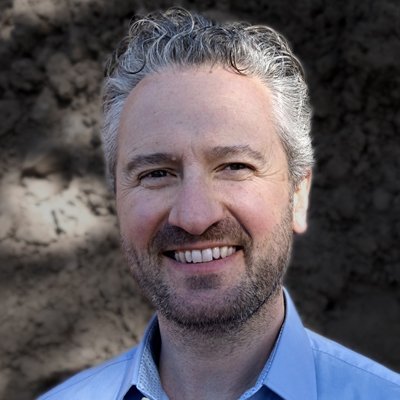 Oisin Lunny is a dynamic and globally experienced event and webinar MC, moderator and speaker. 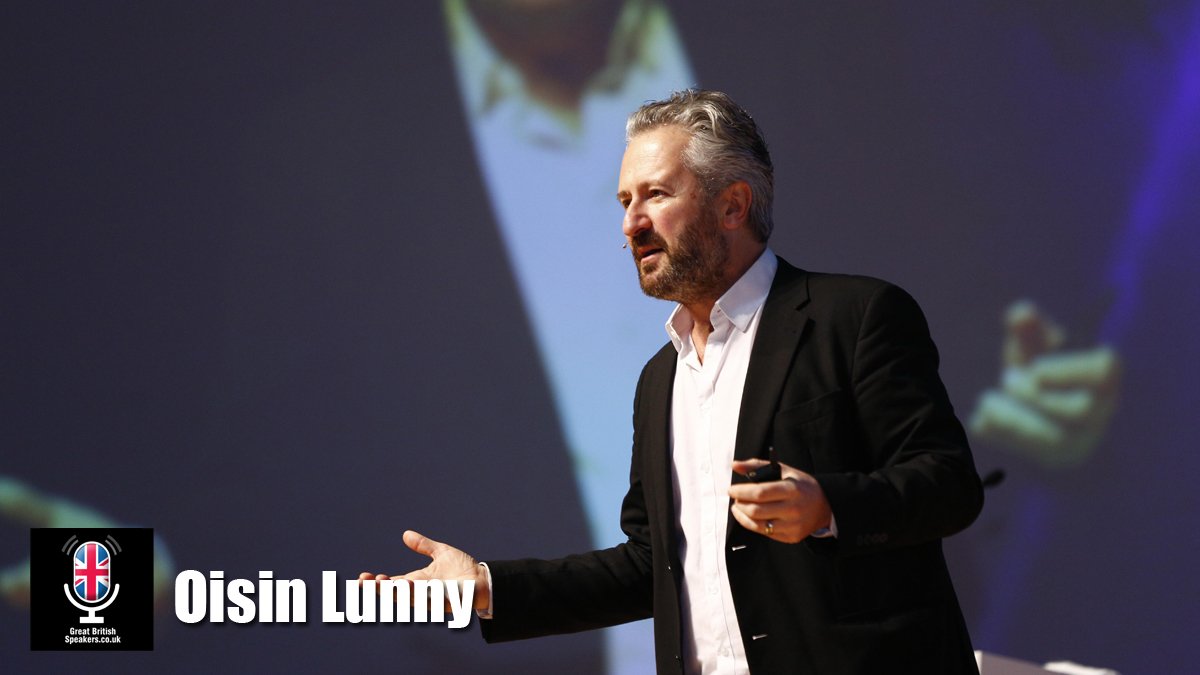 Oisin Lunny is an award-winning marketer, webinar and podcast host, MC, public speaker, virtual event consultant, UX business professor, and writer. His work has been translated into Chinese and Arabic, and read over half a million times as a senior contributor to Forbes, music editor at PHOENIX Magazine, and via regular contributions to The Guardian, CX Magazine and many others.

He has also been featured on CNN, BBC, The Observer, The Telegraph, Business Reporter, The Drum and CMO.com. He is also the editor of Adrian Swinscoe’s book Punk CX. He is the host of the Siemens Advanta podcast and the Audio Talks podcast by HARMAN, and has worked in a series of leading global technology firms over the past 20 years as Global Product Manager, Country Manager, VP of Technology, Senior Market Development Manager, and Chief Evangelist. 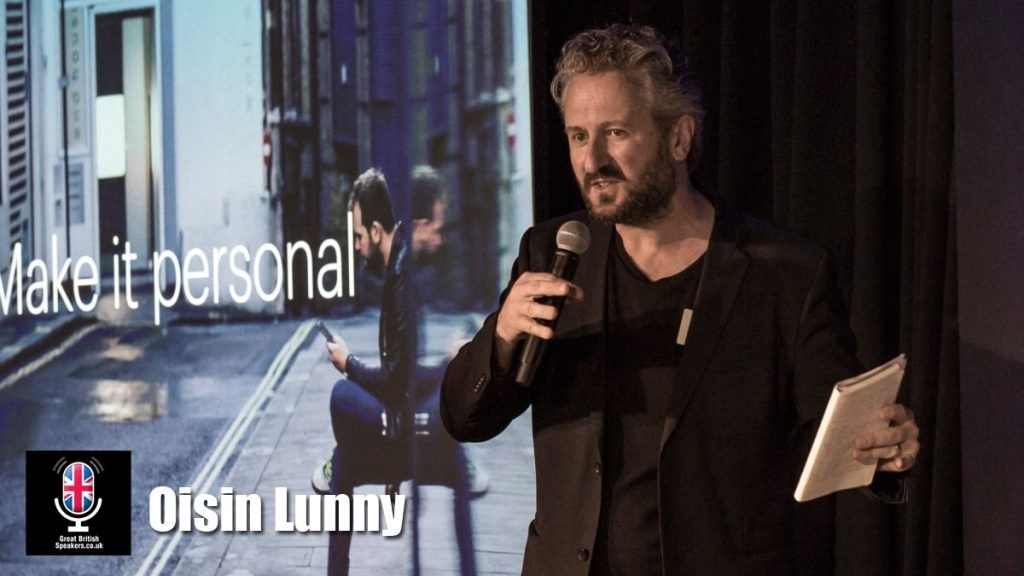 Oisin has hosted, moderated and given keynote presentations at over 200 conferences in every corner of the world, including TEDx, MWC and six times at SXSW. He is known for reliably owning the stage as an experienced event MC, and facilitating vibrant discussion with senior leaders from industry, technology, culture and government.

He has joined advisory boards for SXSW, The Economist Big Think, Customer Experience World, Digital Marketing World Forum, Dublin Tech Summit and the Customer Experience Foundation. He was named the #5 most engaged marketer in the UK by LinkedIn, Top Twitter Influencer in Mobile Technology by Technopedia, and Top Thought Leader in Mobile by mCordis. 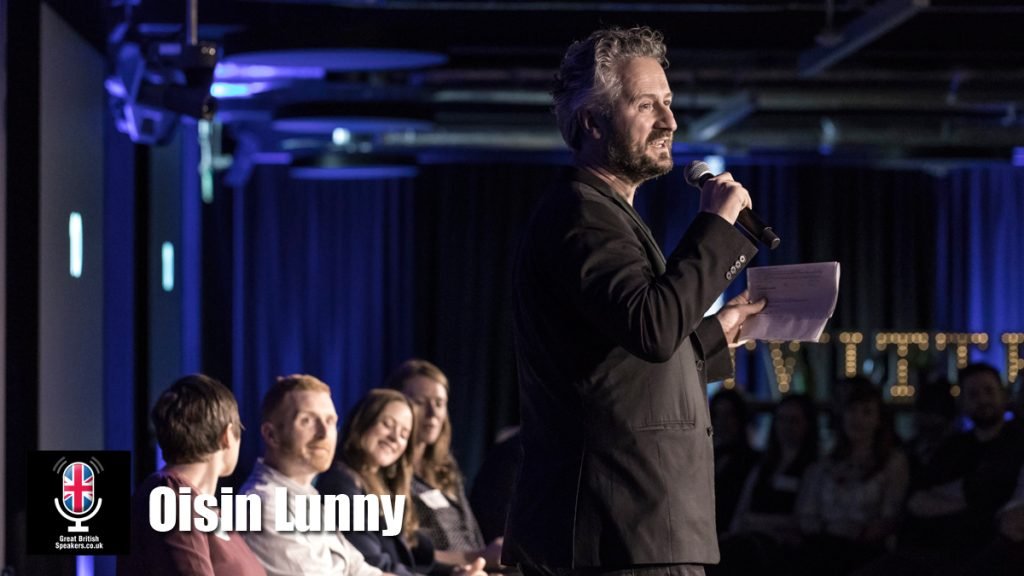 Oisin maintains a parallel profile as a composer, producer, and DJ. His decades of experience in the creative industries enables him to bring insights from the world of music into entertaining keynotes about the art of networking and business leadership. His first band had a UK top 30 hit and supported Depeche Mode and U2, while his solo music has been featured in films The Mean Machine and Human Traffic.

He also composed the original scores for several BBC and Channel 4 documentaries. Oisin keeps his lifelong passion for music alive by hosting a fortnightly radio show on Slack City Radio.

Oisin is a rock star, our dear friend and a true partner of iCU Events for a long time. There’s a hardly anyone as smart, sharp, and winsome to run the show like Oisin does!”
iCU Events International Limited

I can vouch that Oisin is one of the best chairs I have seen. Top guy too.”
Savant Events

He delivered an outstanding and engaging presentation that totally captivated my team and shared his expertise, passion and insight about empathy in our digital world. An incredible professional, charismatic and fun presenter and a man with many talents. I so look forward to working with him again in the future!”
Live Nation Entertainment

Oisin is the only MC we consider for our Keynote sessions at the World Gaming Executive Summit; he puts our sponsors at ease, encourages an insightful debate and gets the most out of our C-level interviews. We only receive positive feedback about him and look forward to working with him again!”
Terrapinn

A great depth of industry knowledge and a personality to bring the best out of people. Very proactive pre, during & post event – asset to any team. Strong speaker be it standalone or in a chairing role.”
Millennial 20/20

Oisin was highly knowledgeable of the key trends in mobile and really brought the subject to life with an entertaining presentation style. I can highly recommend him as a speaker.”
The Guardian

Oisin did an amazing job moderating our panel at MWC. He was engaging and funny and kept the audience interested. I would love to have Oisin as a moderator at a future event.”
7digital

Not only was Oisin a phenomenal presence as MC of the FUTURExTECH Stage at Dublin Tech Summit, he was also an event organiser’s dream to work with. From facilitating introductions to fascinating speakers pre-event and managing his stage on the day like the seasoned professional he is, Oisin also jumped in last minute to moderate a panel after an unexpected speaker cancellation and absolutely saved the day.”
Dublin Tech Summit

I recently witnessed Oisin present and sit on a panel in London for The Retail Conference. Charismatic and engaging he gave the audience a provocative insight into the challenges they face and the role that mobile can play. Most importantly he was in the bar afterwards, happy to have a drink and exchange ideas that can transform your business.”
Yodel Mobile

One of the most captivating speakers I have heard. He knows his stuff inside out and has the style and charisma to engage an audience.”
Digital DNA