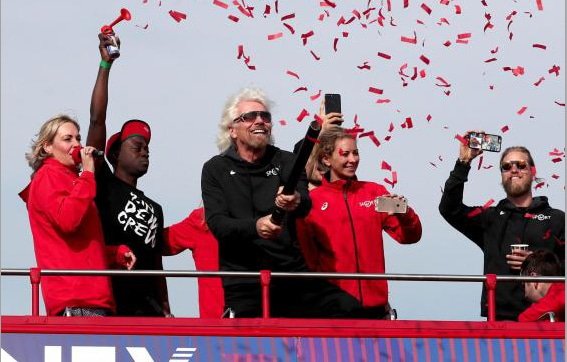 Jo was the MC for the first-ever Virgin Sport Hackney half marathon on Sunday.

Her role was quite intense, keeping the day running smoothly from the audience’s perspective and interviewing runners before, during and after the event.

Over 10,000 people ran the 13-mile route around the Olympic Park in east London.

The fitness festival was very much a family affair hosting multiple sporting activities, including a one-mile race for local primary school children.

Speaking at the event, Sir Richard said: “I think the obesity crisis in the UK is turning somewhat and I think it’s events like this that contribute to it getting better”.

If you’d like Jo to host your event, as she is fully experienced and managing large gatherings of people…from the 2012 London Olympics, Tom Kerridge’s Pub in the Park, Chris Evans Carfest to yacht racing in Dubai, just call Jane Farnham at Great British Presenters on 01753 439 289.

Virgin Sport host Jo is just one of our team of sports host and comperes – they have experience of major international sporting events such as the Tour De France, World cup, Sailing, Rugby and Golf to name a few.

Take a look at Jo’s showreel below or her full Bio page HERE.

To hire Jo as a live host, product demonstrator, presenter, or to present your video contact us.