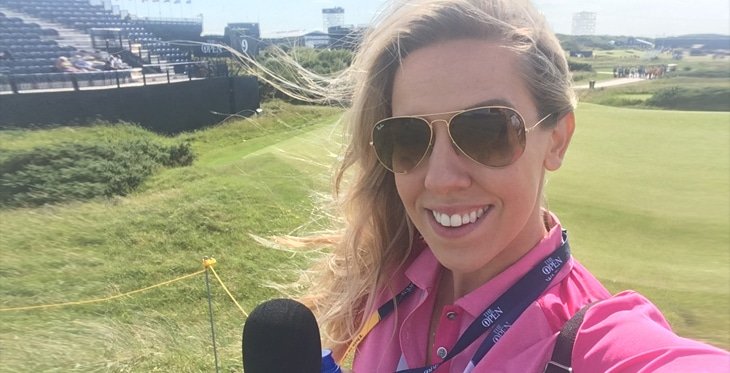 “I am over the moon to be able to tell you that I am joining Rhys ap William as your female co-host for….. The 145th Open at Royal Troon Golf Club!!” Ali loves to play golf and to have the opportunity to interview the Worlds No 1 players is a dream come true!Ali had the chance to speak with Rikard Karlberg and then spent an afternoon with Keiron Stevenson who is the Pro at Royal Troon. Not only was it a fantastic interview, but she was also given the chance of a lifetime to play the infamous “Postage Stamp” or the 8th!“I didn’t just take my 7 iron tee shot, I only went and landed on the green! Keiron said aside from a hole in one, I landed in the best possible position for a hole that is notorious for being the shortest hole in the Championship!

Ali is an experienced Scottish TV presenter based both sides of the border, equally capable both in front of the camera and hosting live events.

Ali has presented nearly 40,000 hours of live and pe-recorded television shows and DVD’s, in both studio and various locations around the world. This has enabled her to develop a positive, natural and engaging presenting style. Ali has demonstrated her natural ability to make her guests feel at ease, whilst still asking those difficult and probing questions, obtaining those all-important answers the viewers are desperate to know while having great fun along the way.

We also have other female and male Scottish TV presenters in the team such as David Farrell, Carol Smillie, Eilidh, Paul Coia and London based Del

To hire Scottish TV presenter Ali as a conference host,  presenter, host for your corporate event or present your video contact us.