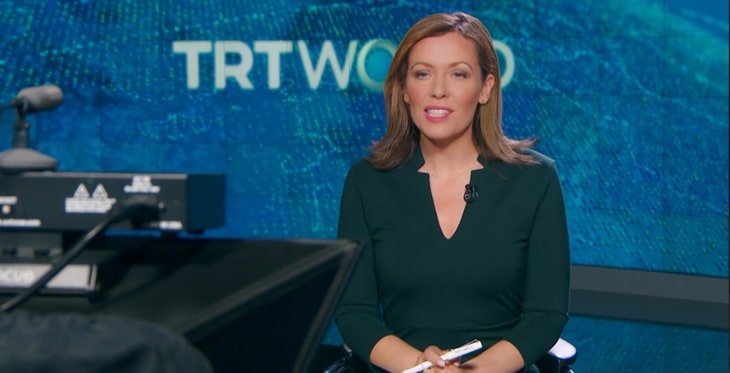 Maria has worked as a TV news presenter and reporter for a number of major international channels.

Maria now presents flagship programmes for TRT World in Istanbul after key on-screen roles at the BBC, Bloomberg and CNBC in London and the Middle East.

Maria is multi-lingual and speaks fluent Spanish, French, Italian and basic Arabic and joins our team of international presenters, some of whom are based in their native and other countries worldwide.

Our Journalists work for a huge number of TV stations, publications, online magazines and corporates. They’re often called in to present end of year financial results to shareholders in live environments or in video format on clients websites.

A number have regular slots at the London Stock Exchange where they are tasked not only with fronting and anchoring the video but liaising with the interviewee – who can often be based overseas and flies into the UK for the interview which has to be accommodated within a very tight calendar of events within the trip.

It’s so important to have a professional journalist in these situations giving credibility and weight to the finished programme.

Additionally, it would be quite wrong to assume that all business figures (however successful) are comfortable not only with the media in general and particularly in the spotlight of a video camera.

After filming sessions all our team are constantly complimented on how they are able to make the interviewee feel at ease in what is generally an unfamiliar situation and allow them to get their message over in a relaxed and convincing way.

Maria is one such talent, so see her in the latest TRT World promo below where she discusses her role at the company and see her full bio page and showreel HERE.