Jamie McDonald is running across America! 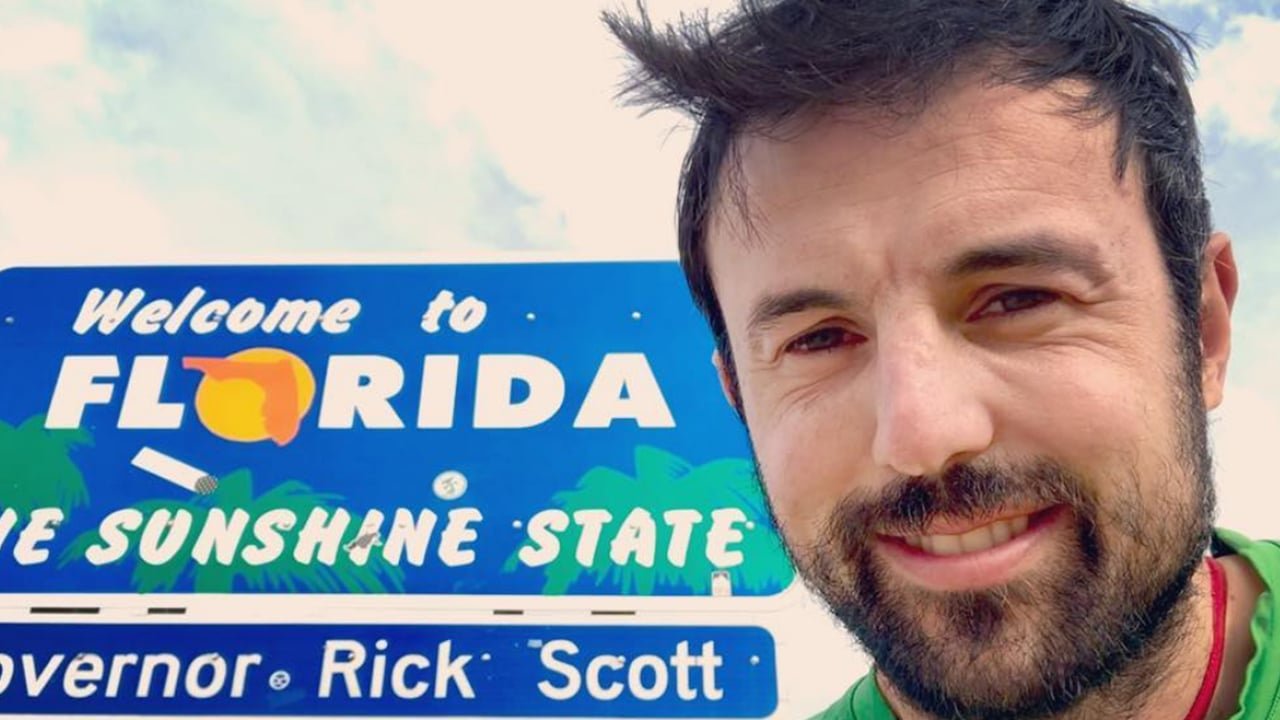 Adventureman is halfway through his coast-to-coast USA solo run! We catch up with the incredible bloke from Gloucester Jamie McDonald who has done 115 Marathons with 100 to go!

Real-life superhero Jamie McDonald, who has raised more than $500,000 for children’s charities through bigger-than-life adventures, is more than 3,000 miles into a 6,000-mile coast-to-coast run across the United States, again dressed as a superhero.

Jamie crossed the state border into Texas, the sixth of fifteen states the adventurer will run through,a few weeks ago. To combat the paralysing 50 degree Celsius (120F) desert heat, Jamie is running marathons throughout the night – sometimes clocking up more than 40 miles per run.

Since the fundraising adventure began in April, he’s been caught in a terrifying flood in Junction, Texas, been mistaken for a Mexican drug runner, dodged striking snakes, scorpions and spiders, been ordered to come out of his tent ‘with his hands first’ by a police officer with his hands on his holster and much more.

32-year-old Jamie McDonald, from Gloucester, spent the first nine years of his life in and out of hospital with a rare spinal condition; syringomyelia. Combined with a very weak immune system and epilepsy, Jamie’s health was very poor – his family feared he might lose his mobility altogether. At nine years old, and against the odds, his symptoms eased, allowing Jamie to slowly become more active.

On the 10th April 2018, Jamie began his second coast-to-coast journey that will take him right the way across the United States. He has just a year to finish the nearly 6,000 mile route, before his Visa runs out.

Beginning at the westernmost point of the United States – Cape Alava in Washington – Jamie has so far ran through Washington, Oregon, California, Arizona and New Mexico. He has ran more than 115 marathons.

He’ll travel through many others, including Tennessee, Washington D.C. and New York, on his way to the easternmost point of mainland USA, West Quoddy Head Lighthouse in Maine.

So far, the adventure has raised more than $24,000 for US children’s hospitals and £36,000 – nearly 15% of the goal total – for Superhero Foundation, a charity Jamie co-founded that grants money to families for treatment they might not otherwise be able to have or afford. Supporters around the world can donate here:

When temperatures allow, Jamie is running as his alter ego Adventureman, in a custom-made superhero costume designed by then-10-year-old, Conner Reddy. Jamie has also changed his name ‘officially’ on social media.

Running by himself and without a support crew yet again, Jamie has ran through rainforest downpours, camped in places famous for their wild animals, including bears, cougars and mountain lions and ran down busy highways.

Here’s Jamie speaking to popular US show Right This Minute about the challenge:

To this point, Jamie has been wild camping en route when not ofered a place to stay by kind strangers. His unbroken running route can be seen on the live tracker developed by and with Microsoft partners including cloud distributor intY and Acacus.

He is also stopping in at schools and businesses along the way, delivering motivational talks to help with the fundraising.

“I can’t quite believe that I’ve made it to the halfway point! I’m so incredibly excited about it, and it’s just motivated me even more to complete this month in the six months I have left on my Visa.

“I’ve been in Texas a month now and I’ve learned to love the desert, even though I’m confident it wants to kill me. I’m not sure what’s worse – the spiders, scorpions, snakes, mountain lions or the heat! But, I’m running hard, and can’t believe I’m already in Texas, my sixth state of the run!

“At the beginning of this run, just days in, I injured my foot so badly that I thought I’d have to start again. Through careful management and even some barefoot running, I’ve hit more than 3,000 miles in around six months. My maths isn’t great, but that tells me that I have a good shot at making it before my visa runs out.”

“I’m doing this to show people, and especially children in situations like I was in, and many worse, that anything is possible, and that you can’t give up on hope and health. I’d like to thank the US so far for taking me in when I’ve most needed it – I couldn’t do this without the kindness of the American people.”

For the last four years, Jamie, now 31, has been working tirelessly to give back. He’s raised more than £500,000 for children’s charities, hospitals and causes around the world throughout his many adventures. He was named as the Pride of Britain ‘Fundraiser of the Year’ for the west for his effort, among many other accolades.

In the time since his last adventure, Jamie has co-founded Gloucestershire-based Superhero Foundation, a charity that grants money to families for treatment not otherwise available on the NHS. He has also written the best-selling book ‘Adventureman: Anyone Can Be a Superhero’, the story of his life to this point – no mean feat for somebody that struggles with dyslexia, and retook his GCSEs aged 23. All proceeds from the book go to charity.

Here he meet up with ‘Wonder Woman’ who is actually the fabulous Anna McNuff another of our incredible motivational speakers who is supporting Jamie every step of the way on his journey in the States!